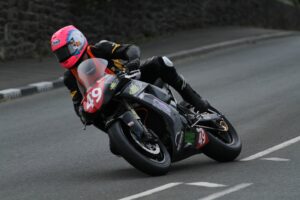 James Hillier On The Pace In Formula 1 Classic TT Practice