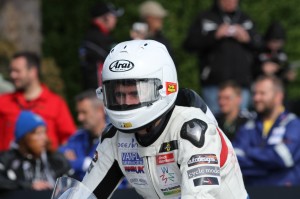 Craig Neve achieved his ambition of competing on the mountain course at 2014 Manx Grand Prix. The talented rider had a consistent practice week adapting to the greatest road racing circuit in the world which set him up well for newcomers A race.

In a highly competitive race, Craig gradually built up his way up the leader board, eventually moving into 7th position on Call Mac scaffolding backed CBR 600 Honda, he maintained the position to the finish line to secure a top result.

Senior race proved to be again highly productive keeping up a good solid pace in recording 26th place finish and been third newcomer home. Craig’s quickest lap speed of 2014 Manx Grand Prix was lapping at 112.161 mph on lap three of newcomers A race, overall a good debut for a rider who has big ambitions in the future on the mountain course of one day becoming a TT winner.