One of a select few racers set to tackle YZF R1M Yamaha machinery at Macau, the ever enthusiastic, genial Torras Martinez has in recent times established himself as one of Spain’s undoubted modern day International roads giants.

Recording a string of highly respectable results at TT 2018, his second TT Races voyage concluded in style with an excellent 18th place finish in the record breaking Pokerstars Senior race.

We mustn’t forget as well Raul’s improving pace, stature at the North West 200, plus impressing on his debut in August at the MCE Insurance Ulster Grand Prix. 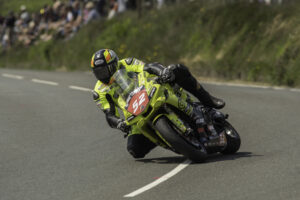 More than deserving the opportunity to sample for the first time, the unrelenting, technical, tough, challenging street roads of Macau, like fellow event newcomers such as Rob Hodson, Dominic Herbertson and Paul Jordan he has the core roads craft to gel smoothly with the 3.803 miles long course.

Speaking recently via Facebook about competition at Macau, he stated:

“Yes!!! We’ll go racing at the Macau Grand Prix !!! I still remember how Kevin Schwantz, (my all time racing idol) won the Macau GP with the beauty Pepsi Suzuki RGV 500.