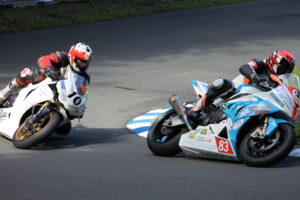 Seasoned road racer Keith Pringle is looking forward to the 2014 road racing season. Keith at this years Scarborough gold cup achieved a top 6 finish competing on a SR1000 BMW in the feature Steve Henshaw international gold cup race. Keith is back at Oliver’s Mount next year competing at the Ian Watson spring cup road races, cock of the north road races and at the Scarborough gold cup.

Keith is also returning in 2014 to the Southern 100 where in 2013 Keith recorded top 20 finishes. Plus Keith is aiming to be back in 2014 at the North west 200 where in 2008 Keith was one of the leading newcomers. Keith Pringle is a talented rider who has over the years most notably achieved many a top result at Oliver’s Mount which has included achieving third place finishes at the Ian Watson spring cup road races in 2008 and finishing in the top 5 in the Steve Henshaw international gold cup race in 2011.