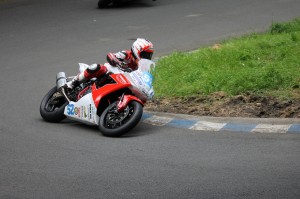 James Cowton continued his good form from TT 2014 at the Barry Sheene road race festival. First leg of modern junior 600 races began with James hitting the front straight away on his own teams CBR 600 Honda.

After taking the lead from here the third place finisher in 2014 lightweight TT race pulled away to take another good race victory around Oliver’s Mount.

Second super twin race and a fantastic start put the rising road racing star out in front at Mere Hairpin on lap 1. Despite going down to second place his race pace was consistently good as he secured another second place finish.

For the second leg of modern junior 600 races James would lead from start to finish to make it a double victory at Barry Sheene road race festival. Following his great results over the weekend the rider who has lapped at the Isle of Man TT at over 124 mph is up to fourth in the Duke road race rankings championship. 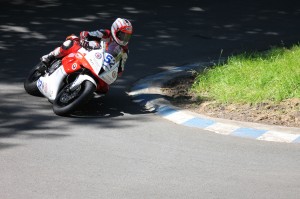 James is set to return to Oliver’s Mount for the cock of the north road races where he looks set to challenge for more top results around the iconic road race circuit which he has taken to greatly since making his debut at Ian Watson spring cup road races in 2011.