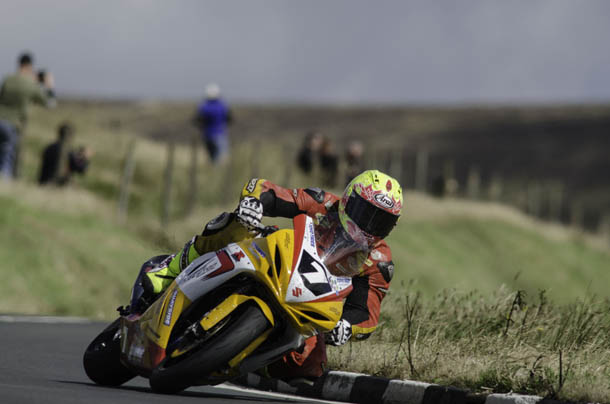 Rising Manx GP force Glenn Harrison has recently expressed his delight at joining the prestigious ‘Tommy Club’, for riders who have lapped at over 120 mph within the Manx Grand Prix.

Piloting the Chris Preston Racing GSX-R 600 Suzuki, the fourth and final lap of the Mylchreests Group Junior race saw him chalk up a maiden 120 mph lap, lapping at 120.129 mph on his way to a seventh place finish. 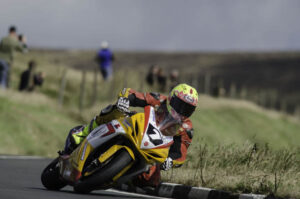 The blue riband Senior race which yielded another 7th place finish, would see the highly rated Manxman record another lap speed of plus 120, circulating the Mountain Course at 120.253 mph.

“Another Manx GP over and it’s been a good one. Finished with two 7th place finishes in Junior and Senior races.

I also managed to achieve my goal this year which was to lap at 120mph and join the Tommy club, a great honour and I feel privileged to be in it.

We lapped at 120 mph in the Junior race on Wednesday and again in the Senior on Friday. I would like to say a massive thank you to everyone who helped us reach our goal as without them it wouldn’t of been possible.

Once again Chris Preston who has continued to support me from pretty much day one of my racing. TOYO TIRES (Mark Hepworth, Keishi Inoue, Sarah Curtis), Quayside Tyre and Service Centre, Christopher Workman, Derek Huxley, Stevie Fleming, Reynolds and Turner Ltd, Dunlop Tyres and all my friends and family who supported us.

Special mention to my brother Nathan Harrison and big Deano, bike was prepared every practice and race and I didn’t have to worry about a thing.

Kelly Watterson for being the best mum and looking after our 2 boys. My mum for feeding everyone and keeping everything tidy.

Big thanks to Marshals, medics organisers who without we don’t go anywhere! Credit to all photographers who got amazing shots, I’m sure I’ve missed some that I’ve seen.”

Looking towards 2018, Glenn is undecided at present as to whether to move up to the TT Races, or remain at the Manx for another year and push for rostrum finishes.