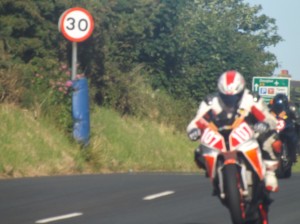 Gaz Evans is ready for the 2014 road racing season. Gaz this year competed at the Southern 100 achieving top 20 finishes, at Oliver’s Mount Gaz recored top 15 results at the cock of the north road races, the Scarborough gold cup would also see Gaz record further consistent and solid results. A major highlight of Gaz’s road racing season in 2013 has being Gaz making his Manx Grand prix debut.

Gaz made his Manx debut this year competing on the P&P racing ZX6 Kawasaki achieving a highly creditable 14th place, Gaz’s best lap speed was over 108 mph. It was in 2007 at the Isle of Man TT as a fan that Gaz was inspired that one day he would compete at the worlds greatest road race. Gaz made his road racing debut at the Southern 100 in 2012 achieving a eighth place finish in the solo non finalists race when competing on a SR1000 BMW.

Looking to next year and Gaz is competing on a SR1000 BMW backed by KS performance at the Ian Watson spring cup road races, cock of the north road races and the Scarborough gold cup at Oliver’s Mount, Gaz is back as well at the Southern 100, it will be Gaz’s third time competing at the Billown based road race.

But arguably the main highlight of Gaz’s road racing season for 2014 is returning to the Manx Grand prix where Gaz is competing on a KS performance backed ZX6 Kawasaki. Gaz Evans despite having only competed in road racing for two years has already proved he has all the ingredients to become a top international road racer.