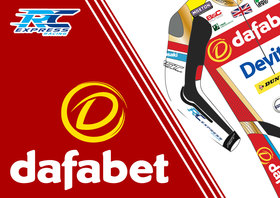 Ivan Lintin and Steve Mercer’s Kawasaki’s this season will sport an aesthetically pleasing livery, with the Dafabet branding gaining a prime location on the ER6, ZX-6R and ZX-10RR mounts.

“The support of an international business with such a strong sporting profile is not just great for the team, but great for the sport. We’re over the moon to welcome Dafabet to the racing family and we’re looking forward to developing the relationship over the next few years.

Having tasted success in the Lightweight class, with three successive Isle of Man TT wins and victories at the North West 200 and Ulster Grand Prix too, the aim now is to make our mark in the Superbike and Supersport categories.

Winning a Senior TT is the team’s goal and with the support we now have from Dafabet, Devitt, and our other loyal sponsors, this is a fantastic opportunity for us.”

“In recent months we’ve been looking at diversification in terms of the sports we’re involved with sponsorship wise and motorsport ticks a lot of the right boxes for the demographic of player we want to put our brand in front of.

The RC Express team impressed us with their forward thinking ideas of how best the partnership could work.

Plus in riders Ivan and Steve, the engineering team and the bikes, we believe we could be looking at a successful season in world renowned road races such as the Isle of Man TT, the North West 200 and the Macau Grand Prix. We’re looking forward to the season and being involved with the team and the sport.”

“We could not be happier. The team has done a fantastic job at securing the support of Dafabet and we look forward to a long and successful future with them, but to maintain the ongoing relationship with Devitt Insurance at the same time is fantastic.

Devitt have been a loyal supporter of the team and we are all thrilled by the opportunity that 2017 brings for Dafabet Devitt Racing.”

“We’re delighted by the progress the team has made over the last year and we’re pleased to continue our involvement in 2017 and beyond.

Bringing Dafabet on board is another indication of the huge ambitions of Dafabet Devitt Racing and we’re looking forward to future success.”

As stated above the RC Express Racing team, will be running under a new team name this year.

Now known as Dafabet Devitt Racing, the team and Ivan Lintin will soon be travelling to Scarborough for the two day Spring Cup National Road Races, where they will be aiming to kick off their roads season in first class fashion.