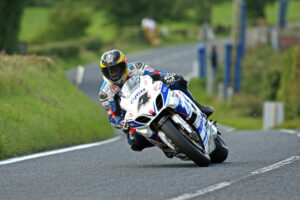 Feature superbike race would prove to be battle royal between Guy and Bruce Anstey, in the end the flying kiwi secured his 10th Ulster Grand Prix victory with Guy achieving second place finish after another excellent performance.

On Thursday the star of TV series speed acquired his 12th triumph around Dundrod winning a closely fought Dundrod 150 superbike race. In what has being a thoroughly consistent season for the hugely popular rider with podium finishes at TT 2014, solo championship victory at Southern 100 and now two podium finishes at Ulster Grand Prix.