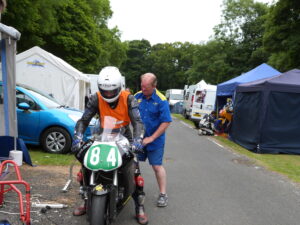 Blue Bear racing/John Batty racing are all set for this years road racing season. The team is running at the post TT races and Southern 100 Scott “Splinty” Campbell in the super twins class. Jack Hunter is making his Manx Grand Prix debut this year on a ER6 Kawasaki for the team as is Stephen Cobbold who is competing on a SV650 Suzuki. Also joining the team for the Manx are Alan Cunningham and Tim Moorehead, the Blue bear racing/John Batty racing team have all the elements to have a fantastic season of road racing in 2014.