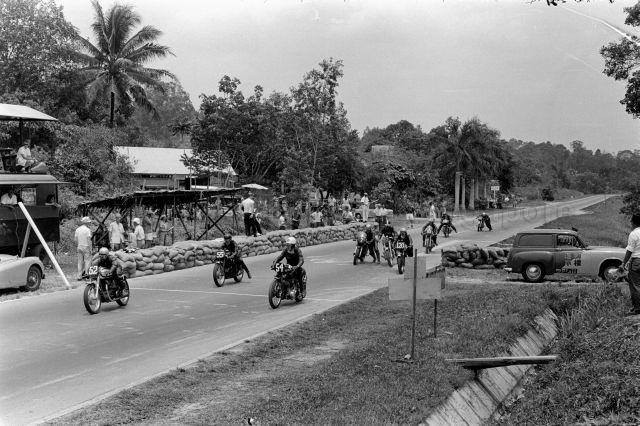 Four years ago as part of Road Racing News Historic Roads Circuits series, I put together the following article on the roads course which held for many years top calibre two, four wheel competition.

Back in 1961 Singapore held it’s first major motorsport event, from the 16th to 17th of September on Thomson Road.

The roads circuit 4.8 Kilometres long, proved an instant hit with competitors, from the two and four wheeled racing fraternities.

Titled the Malaysian Grand Prix from 1962 through to 1965, the event was re named back in 1966 to it’s original name of the Singapore Grand Prix, following Singapore’s independence from Malaysia.

Inaugural winner of the feature motorcycle race, was Chris Proffitt White, who back in 1961 was competing on board a Honda. 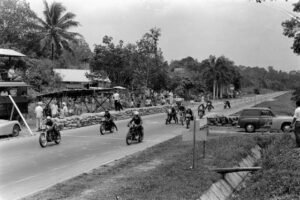 Photo by National Archives of Singapore

Since then up to 1973, many a famous racing name competed around Thomson Road. This includes two times TT winner and four times world champion Hugh Anderson MBE, plus the only rider from Japan to have been victorious at the TT Races, Mitsuo Itoh.

In the 13 years in which roads competition took place, Thomson Road established itself as one of Asia’s most famous roads venues.

Having started before bikes took to the Macau Grand Prix, which first happened in 1967, it was for a sustained period of time, the Asian equivalent of the Isle of Man TT.

Distinctive sectors of the circuit like four bends called Snakes and a v-bend called Devil’s, proved amongst the most challenging aspects of a roads circuit, which rewarded a smooth riding style, determination, grit and most of all bravery.