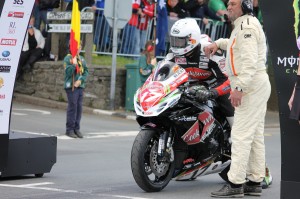 For Dan Kneen’s its being an ambition of his for a long time to become an international road race winner. 2014 superstock race at Ulster Grand Prix has seen Dan full fill his undoubted talent and ability, for Dean Harrison despite being edged out for race victory its still a debut podium finish at the worlds fastest road race.

Hutchy Gradually Getting Back To His Best Around Dundrod