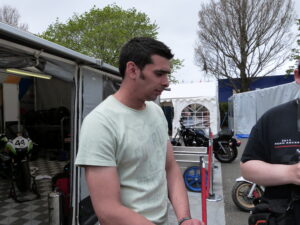 2013 has seen Derek Shiels have a thoroughly successful season of road racing. Amongst the highlights for Derek have included a top five finish at the North West 200 and lapping at over 128 mph at the Ulster Grand Prix, Derek said on the highlights of this season ” I think 5th in the stock race at the north west 200 was a good result for us and lapping the ulster grand prix at 128mph on the stocker was good to. ”

Derek competed for the first time at the Isle of Man TT this year for the CD racing team on a ZX10 Kawasaki and achieved a 23rd place finish in the superstock TT race and a top 30 finish in this years senior TT race. Regarding this years Isle of Man TT Derek said ” The TT was a great experience really enjoyed riding the bike on the mountain circuit I chose to respect the circuit and learn it gradually but just shy of 123 mph lap was a respectful lap speed.”

Looking to next year and Derek’s main aims are to get good results at the North West 200 and Ulster Grand Prix, and to improve his lap speeds at the Isle of Man TT and to enjoy his racing. Derek’s one of the most improved riders on road race circuits, his results at this years North West 200, Ulster Grand Prix and Isle of Man TT show that Derek is set in the future to become a international road race winner.

Dan Frear Set To Return To Oliver’s Mount In 2014