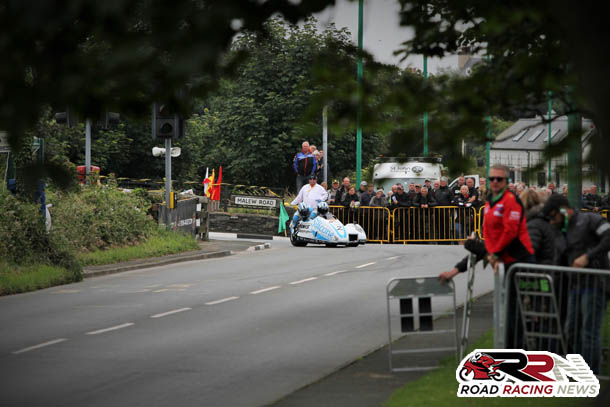 John Holden/Lee Cain where declared winners of a dramatic Sidecar championship race, at the 2017 Southern 100, as drama a plenty unfolded on the final lap at Cross Four Ways.

A race long battle between Tim Reeves/Mark Wilkes and the Birchall brothers, who had previously set a dazzling new lap record of 101.545 mph, looked set for a titanic conclusion, between the world class three wheeling crews.

At Cross Four Ways though, an incident was to occur, forcing both out of contention. Each had their own point of view on what happened, with Tim Reeves in particular voicing his frustration at having the opportunity of another premier win at Billown, curtailed.

Following a stewards inquest into the incident, it was decided that Silicone Engineering Racing/Barnes Racing’s John Holden/Lee Cain would be winners of the coveted championship crown. 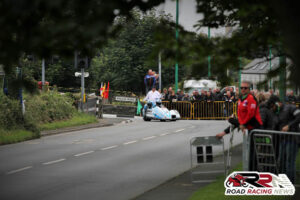 Tony Baker/Shelly Smithers where an excellent fourth in front of the Ramsden’s Steve and Matty, as Greg Lambert/Julie Canipa rounded out the top six finishers.

In total 11 outfits finished a record breaking, but also drama filled seven lap race, which will be remembered for many years.