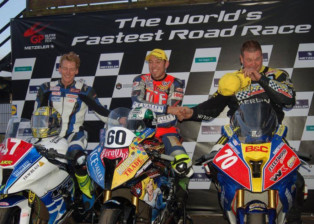 After a hectic week preparing not only his own bikes but other racers bikes at his Lincolnshire based tuning house, Phil is finally ready to go to the Ulster GP, an event he excelled at when he made his debut in 2014.

Riding his BMW S1000RR’s he achieved a best lap of over 124mph, finished on the podium in the Dunrod 150 and an amazing 14th in the main superbike race, this year he has the same machinery, Superstock & Superbike BMW’s, however to help with his power deficit BMW & Hawk Racing are loaning him a BSB spec Motor, something he will put to good use in his quest for even better results in 2015.

Further Help has been received with the last minute addition of some new sponsors, SupDupa Tee’s, and once again they will be located in the Fleetwood Grab Services Truck.

Phil had this to say.

‘I’m properly looking forward to the Ulster, its an event we were really well received at in 2014, and it suited my riding style too, I did over 124mph and the main race was mega and we managed 14th, this year we have a bit more power, I’ll be running two bikes again, both superstock spec chassis but Hawk Racing/BMW have agreed to loan us a BSB engine, we really struggled with top speed last year and this should help us!, so thanks to them, and all my usual sponsors’