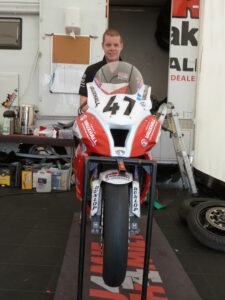 Jamie Hamilton is set for the supersport TT races this year. Jamie is competing on a ZX6 Kawasaki backed by John Duggan, its the same bike as Jamie competed on last year which saw Jamie become supersport Irish road race champion. At the Isle of Man TT in 2013 Jamie achieved a superb 12th place finish in the opening supersport race whilst the second race would see Jamie acquire a top 15 finish. Alongside competing in the supersport TT races Jamie is returning to the Southern 100, North West 200, Ulster Grand Prix and Oliver’s Mount.

Jamie has a good record at Oliver’s Mount, 2013 saw Jamie involved in many a fine race at the mount including winning the super twin races at the Ian Watson spring cup and finishing runner up in the feature race at the cock of the north road races. Jamie is competing at the Ian Watson spring cup road races, cock of the north road races and Scarborough gold cup this year at Oliver’s Mount. 2014 is set to be a top year of road racing for Jamie Hamilton who since competing for the first time at a road race in 2011 at the North West 200 has quickly become one of the biggest rising stars in road racing.