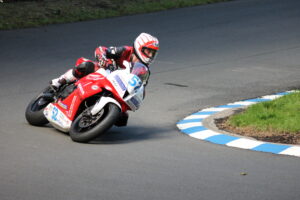 James Cowton has joined Stewart Smith racing for the 2014 road racing season. James is competing for the team on a ER6 Kawasaki in this years lightweight TT race whilst also competing at cock of the north road races, Southern 100 and Scarborough gold cup. James in 2013 proved he is one of the biggest rising stars in road racing, James at the Manx Grand Prix lead throughout the junior race lapping at from a standing start 119 mph.

Plus James achieved 3rd,4th,5th,7th place finishes at Southern 100 in super twin, supersport and superbike races, including in the supersport race battling Michael Dunlop, Jamie Hamilton and Dan Kneen. James made his North West 200 debut in 2013, James finished in an excellent seventh place in the opening super twins race, whilst the second supersport race in wet conditions saw James record a top 10 finish.

Stewart Smith racing had an excellent season of road racing in 2013 as did James Cowton, the combination of a top team and top rider combining together means both are set for a fantastic season of road racing. James Cowton is a rider who has the talent and ability to be one day a TT winner, James is still on the lookout for a 1000 superstock/superbike for this years Isle of Man TT which James is greatly looking forward to competing at.