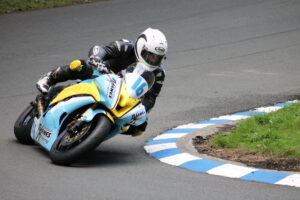 James Coward is all set for the 2014 road racing season. James has this year achieved many a notable result including achieving 20th and 16th place finishes in the supersport races at this years Isle of Man TT. Plus at this years classic TT races Jamie achieved a superb 3rd place finish the 500cc classic TT when competing on the Craven Manx Norton.

Looking to 2014 and James is competing for the RJP racing team on a CBR 1000 Honda Fireblade and the Barnes racing team on a R6 Yamaha at the Isle of Man TT, North west 200, Ulster grand prix, Southern 100, Ian Watson spring cup road races, Cock of the north road races and at the Scarborough gold cup.

James is a rider who is improving all the time at the international road races, James has lapped at the Isle of Man TT at over 120 mph and in 2014 James has every chance of achieving improved lap times and personal best race finishes. In all James Coward is a rising star in road racing who has a huge future in front of him.