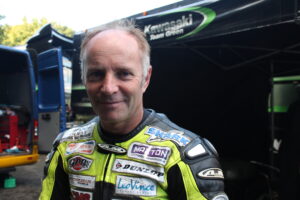 Ian Lougher rounded off his road racing career with a 16th place finish at this years Macau Grand prix. Ian competing on the ILR/Barnes racing CBR 1000 Honda Fireblade rode solidly throughout. Ian Lougher is one of the all time greats of road racing a ten time Isle of Man TT winner, winner of over 100 races at Oliver’s Mount, multiple times Southern 100 winner, winner of the Duke road race rankings championship three times.

Ian’s 2013 road racing season has being another good one in the road racing hero’s career. It has included a brilliant top five finish at the Ulster Grand prix in the superstock race when competing for the WA Corless joinery/Jackson racing team on a CBR 1000 Honda Fireblade, plus this years Southern 100 saw Ian achieve three top five finishes in the superbike races and in the Southern 100 solo championship. So Ian Lougher in his final year of road racing has ended his road racing career this year on a high.