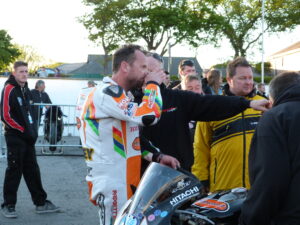 Isle of Man TT hero Bruce Anstey is back with the Padgetts racing for next years international road races. Bruce has in 2013 achieved 2nd,2nd and 3rd place finishes at the Isle of Man TT. In the senior TT race Bruce lapped at 131.530 mph making Bruce the second fastest rider in TT history, Plus in the second supersport TT race this year Bruce lapped at the quickest speed he’s being at on a supersport 600.

Looking to 2014 and Bruce is competing on a brand new superstock CBR 1000 Fireblade Honda for the Padgetts racing team, whilst Bruce will also be competing on Honda’s in the superbike and supersport races next year.

2013 has seen Bruce Anstey achieve nine podium finishes in total at this years international road races. Bruce has a fantastic record at the Isle of Man TT, North West 200 and Ulster Grand Prix, Bruce still holds the lap record for the Ulster Grand Prix which he set in the 2010 second superbike race. One of Bruce’s main ambitions is to win a superbike race at the Isle of Man TT and 2014 could be the year that one of the best road racers over the last 15 years achieves this.

Wayne Kirwan Aiming For Full Season Of Road Racing In 2014