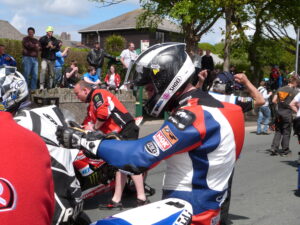 Up for grabs at TT 2014 the TT supporters club Trophy – a silver tray on it plinth – to be presented to the competitor achieving the lowest aggregate time across the two supersport 600cc races.

Michael Dunlop is the current holder after his double victory in the class last year – obviously don’t count him out of contention in 2014, but there will be several competitors out to hold the trophy aloft at the end of the week, in, after all, what is a very strong entry.

The Susan Jenness Trophy – presented to the lady competitor making the most meritorious performance of the meeting in the eyes of the TTSC executive committee.

The trophy commemorates TTSC member, Susan who tragically lost her life whilst marshalling an off-road UK motorcycle competition. During this year’s TT meeting, Estelle Leblond will be presented with the trophy for her amazing efforts as a debutant in the sidecar races of TT 2013. Estelle will be out to retain the trophy, but faces stiff competition from fellow lady participants.