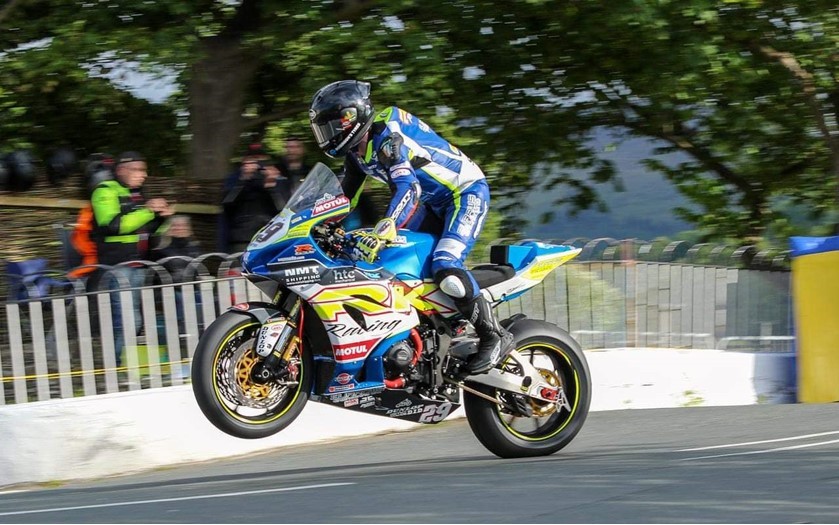 Showing herculean like spirit, BE Racing/RK Racing’s Michael Browne despite carrying existing ankle injuries and kneecap issues, finished quickest competitor from the Republic of Ireland at this year’s TT Races.

Prior to this achievement, Browne’s TT 2022 race week yielded a range of creditable finishes.

15th in the opening Supersport race, he placed 17th in the following Royal London 360 Superstock encounter whilst the second, final Monster Energy Supersport race stint saw him finish an excellent ninth in front of esteemed racers including John McGuinness MBE and Ian Hutchinson.

Still visibly going through the pain barrier, Browne’s TT 2022 voyage ended with a mix of positives and misfortune.

From a positive point of view, he set a major new personal best lap speed of 126.679 mph, which as aforementioned made him the fastest ROI rider of the returning TT Races.

Misfortune wise, when looking good for a strong race result, he was forced to retire during the races’ penultimate lap, as mechanical gremlins struck his GSX-R 1000 Suzuki steed.

None the less, an extremely accomplished TT campaign for the dairy farmer, who proved again his prominent skillset around the fabled, mythical Mountain Course.

Reflecting on the past two weeks on Manx shores, Browne stated:

“I done everything in my power to get to the TT this year after the crash and thankfully it paid off. During practice week, the agony I was in there was plenty of times where I could have thrown in the towel.

But as the week went on, I started to gain a bit more movement in the ankles and learn how to ride the bike to suit.

I was disappointed to not finish the two superbike races, more so to reward the lads for their efforts but the 9th place in the Supersport race even put a smile on my face.

I can’t thank the team enough for the past two weeks. If I was here with my own bike and no support, I couldn’t have done what I done. It just makes me eager to come back here fit next year and give it as proper go.”

“Even making it to the TT this year with Mike was a small miracle, we committed to it together at the 11th hour not even knowing if he would be fit to ride a motorbike.

It was obvious to see in practice week he was struggling quite a bit with his ankles despite setting his fastest ever lap round the TT late in the week.

His performances in race week have been nothing short of amazing. Anyone who seen Mike walk will know how special the results were.

To get a top 10 in the Supersport race was the icing on the cake, it’s up there with most enjoyable TT’s I’ve had as a team boss, I must thank Charlotte from RK Racing and all our loyal sponsors once again for making this possible.”