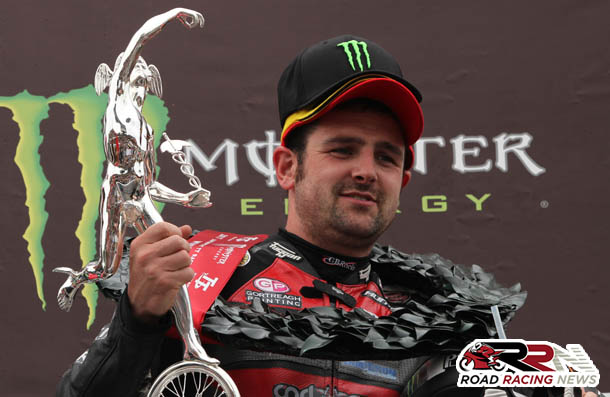 After a lengthy delay, the opening Monster Energy Supersport race of TT 2017, got underway in pretty good conditions around the Mountain Course, although there was the odd damp patch greeting competitors.

As in the RST Superbike race, it was JG Speedfit Kawasaki’s James Hillier who took an early lead at Glen Helen, by just 0.424 of a second over William Dunlop, Michael Dunlop was just 0.13 behind his brother, Gary Johnson in fourth, was only a further 0.3 behind, the Supersport TT lap record holder. 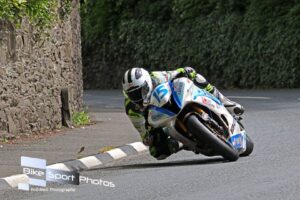 Hillier maintained the race lead at Ballaugh Bridge as Michael Dunlop slotted into second, just under half a second back, with brother William and Gary Johnson, in extremely close proximity.

Dunlop powered to the front at Ramsey Hairpin, 0.9 in front of Hillier, but soon it was roles reversal at the Bungalow, with the 2013 Lightweight TT winner regaining, the lead.

From here “Dynamite” maintained a small advantage over Dunlop to the end of lap 1, to lead the race by 0.397 of a second, after 37 and three quarter miles!

Lap 2 began with drama as third placed Harrison, retired at Ballacraine. This elevated William Dunlop back into third, behind his brother Michael Dunlop, who for the second time moved into the race lead, at Glen Helen.

From here Dunlop, steadily built up an advantage, albeit slender that was growing. Over the mountain though Hillier had a good run, taking a few tenths here and there, to marginally eat into the 13 time TT winners advantage.

William Dunlop firmly in third place, was starting to come under pressure from Peter Hickman, who as in yesterday’s big bike encounter, was getting quicker and quicker as the race went on.

Dunlop’s lead was down to under 2 seconds at Glen Helen on lap 3, following a lengthy pit stop for the Ballymoney based rider.

The only rider to lap the Mountain Course under 17 minutes, was soon back into the groove, moving 3.57 clear at Ballaugh Bridge, then almost six seconds clear at Ramsey Hairpin.

Through the next timing points, the Bungalow and Cronk Ny Mona, the lead crept up to almost the seven second mark, by the end of the penultimate lap, Dunlop lead Hillier by 6.5 seconds. 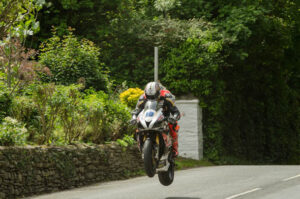 Behind the leading duo, Peter Hickman on the TROOPER Triumph, was on a charge, moving in front of William Dunlop, to put himself in prime position, for a second successive TT podium finish.

Eight times Supersport TT winner, Ian Hutchinson fifth, looked out of contention for another TT victory, within the middleweight class.

Reactive Parts backed Gary Johnson remained sixth in front of Bruce Anstey and Conor Cummins, who where both now in front of Dan Kneen, who incurred a 1 minute penalty time penalty in the pits.

The fourth and final lap of the race, saw Michael Dunlop get the hammer down, going 9.4 clear at Glen Helen, then by the Bungalow, in excess of 14 seconds.

He went onto the cross the line at the end of lap 4, to record a 14th TT victory, equalling the legendary Mike Hailwood, in terms of wins at the most famous road race in the world.

James Hillier second, made it ten TT podium finishes, to further cement his reputation, as one of the TT aliens. 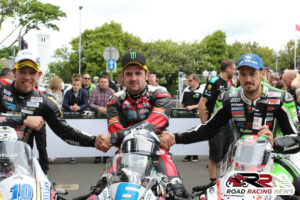 Peter Hickman lapping close to the 127 mph mark, on the final lap, wrapped up the podium finishers, his second successive podium finish at TT 2017. 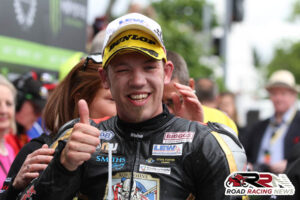 William Dunlop finished a very respectable fourth, in front of Ian Hutchinson who had, it has to be said a below par race by his high standards. 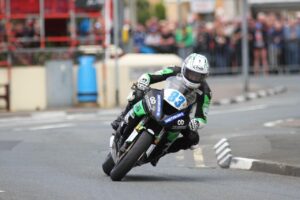 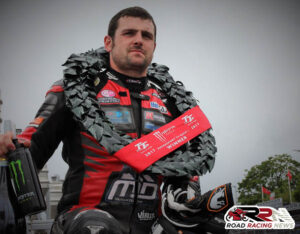 Another gripping Supersport TT encounter; it was one that proved you can never ever write Michael Dunlop off.

In recent years he has become arguably the rider everyone has to beat to taste Superbike/Senior TT success, he’s still though as shown today, a formidable competitor aboard Supersport machinery. 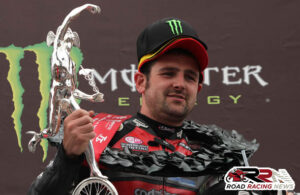 After the disappointment of retiring from the lead of yesterday’s Superbike race, you could sense the relief in Michael’s voice during the press conference, at adding to his already golden TT record.