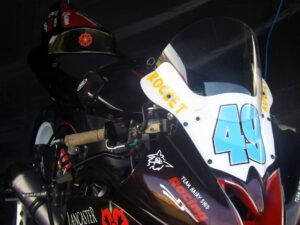 Many a top performer at the 2013 Manx Grand Prix is set to compete at the Isle of Man TT in 2014. 4th place finisher in both junior and super twin Manx Grand Prix races this year Colin Stephenson is competing in the superbike, superstock, supersport and senior TT races next year for the DHT racing team on a CBR 1000 Honda Fireblade and R6 Yamaha.

Leading newcomers at the Manx in 2013 Alex Pickett and Neil Gregory look set to compete for the first time at the Isle of Man TT next year. Alex Pickett is competing for the DP Coldplaning/TCR racing team on a CBR 1000 Honda Fireblade in the superbike, superstock, supersport and senior TT races.

Top 15 finisher in the 2013 super twins Manx Grand Prix race Tuukka Korhonen is greatly looking forward to TT 2014. Tuukka is competing on a ER6 Kawasaki for NK motors in the lightweight TT race whilst for the supersport races Tuukka looks set to compete on a CBR 600 Honda.