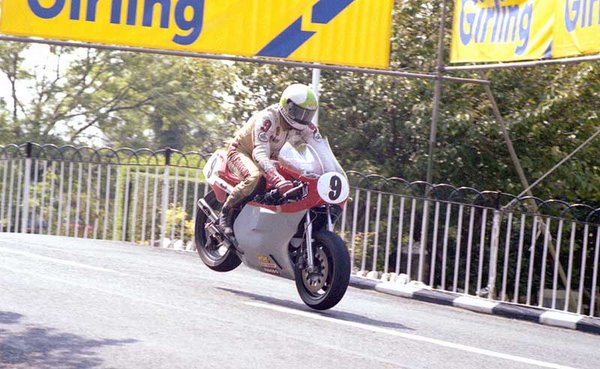 1979 Classic TT winner at the time beating the legendary Mike Hailwood by just over three seconds, in total three times a TT victor, one of Scotland’s greatest ever International road racers, the legend that is Alex George is the next rider to take part in Road Racing News, ten questions challenge.

A former works Honda racer, plus a team mate of stars such as Joey Dunlop and Ron Haslam, his answers to the popular series of questions are as follows:

“Has to be the Temple 100! Quite a simple track, but it measured your bravery, as well as your lap time!!.”

“The people in and out of the paddock, example Big Sam. I looked after him at Silverstone F750, some time later (the next year) I arrived at Skerries without a bike.

He showed me his spare Honda in the back of his van and said “gitt you on that oul thing”, he won the race and I was 3rd ha ha ha!!”

“The TT is the ultimate challenge, the North West 200 sets you up speed wise for the TT and the Prix (Ulster GP) is unique. Fast, tight and airborne often. Love ’em all !!” 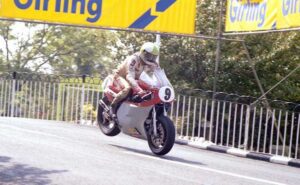 If you were in amongst these guys, you were learning and going bloody quick!!”

“Best roads moment, fleeing around Dundrod on the works Honda, Joey just behind, we got back into the paddock, where Joey said, “yerself and that wee bike, were goin rightly” which in Joey-speak was indeed a compliment!!.”

“Anywhere, there are I am sure many towns and roads which would Love to have events in both North and South and in the UK, all fine until H+S get involved, or the always unpredictable weather takes over. Value our roads meetings, all special, and I don’t see any additions!!”

“Roads heroes, of them all it still has to be Joey, he could jump on anything, anywhere, in any weather, and get the best out of it, as long as he had a fag and a coffee.

Then if you look at the older GP’s, many of which were on roads too, you have Bob Mcintyre, Mike Hailwood, Geoff Duke etc, all who were road stars too!!.”

“Supersport is definitely more equal and more about the rider. Superbike, you can be the best rider out there, but without a highly funded top crew, chassis, motor, suspension, tyre, electronic techs, you are wasting your time.

JR (Jonathan Rea) has been clever in knitting together just such a crew, and turning it into championships!!”

Why not a mini race and the aggregate of 3 or 4 Random lap times taken to secure pole??? That way everyone would be on it in all of the sessions!!!

Nothing is more boring than having 1 rider scream off into the lead and win. We want to see hand-to-hand combat, lap after lap.”