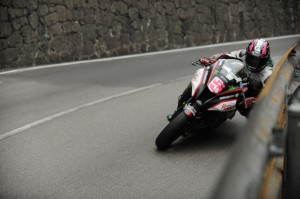 Stuart Easton is back at the front around the Macau Grand Prix. The rider competing for Paul Bird motorsport secured pole position for this years Macau GP following lap time of 2 minutes 25.975 seconds as he finished half a second clear of eight times winner around Macau Michael Rutter.

Its the first time in three years that Stuart has competed at the iconic road race where he has been victorious three times. Victory in 2008 was secured following a fine all round performance on Doosan backed CBR 1000 Honda Fireblade, 2009 and 2010 saw him record race wins competing for Paul Bird motorsport.

Alongside his Macau GP exploits Stuart has a good record at the North West 200 which includes second place finish in feature race back in 2010 where he was involved in great battle for victory with Alastair Seeley.

Having secured pole positions for tomorrow’s race expectations are high that the popular rider can achieve victory number four around Macau.