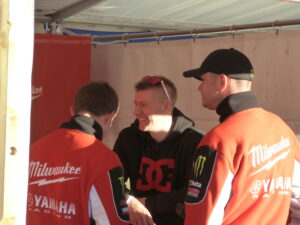 Going into the 2013 Macau Grand Prix the biggest talking point was how would Ian Hutchinson fare on his return to action having missed the Isle of Man TT, North West 200 and Ulster Grand Prix. The answer was to be provided once practice got underway.

After free practice 1 Hutchy was in the top five, then second practice saw the man in the top three of the lap times before stunningly setting pole position time for the race. Already this was a quite remarkable performance from the eight times TT winner, who would have thought on his return to racing that he would set pole position time at Macau.

From the start it was Gary Johnson who got the hole shot on the Quattro Plant motorsport backed CBR 1000 Honda Fireblade superbike. Michael Rutter occupied second place in front of John Mcguinness and Ian Hutchinson. Soon though positions out front would change with Hutchinson moving in front of Mcguinness into third place whilst Johnson and Rutter where close together in the battle for the lead.

Mid way through the race and Michael Rutter had hit the front and was pulling away, Gary Johnson was in front of Ian Hutchinson in second place but the rider from Bingley was on a charge, proving despite being out for so long he had lost none of his speed and instinct when racing.

Hutchinson was soon in front of Johnson and went in pursuit of race leader Rutter. By lap eight Hutchy was in front of Michael Rutter who despite having rode immaculately throughout had no answer for Hutchinson’s pace once the Milwaukee Yamaha rider had gone into the lead.

And so from then on Ian Hutchinson pulled further and further away from Rutter and was up to over 2 seconds in front when the red flags went out which meant Ian Hutchinson was declared winner of the 2013 Macau Grand Prix. A truly remarkable performance from Ian who has being through so much in the last few years injury wise, Michael Rutter finished runner up for SMT racing, Gary Johnson clinched his first podium finish at Macau finishing in third.

But the race and 2013 Macau Grand Prix belonged to Ian Hutchinson who provided one of the best moments in motorsport in 2013 by winning on his return from injury. Plus Hutchy’s win means Ian has now won at every road race which he has competed at which includes Cookstown 100, Scarborough gold cup, Ulster Grand Prix, North West 200 and Isle of Man TT.