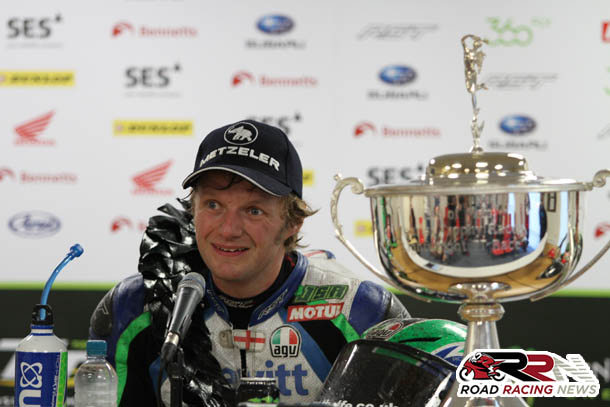 The Bennetts Lightweight TT of 2016 showcased and some the proven, prodigious talent of Ivan Lintin on Super Twins machinery, as the Bardney racer clinched in style back to back Lightweight class titles.

At the time my race report detailing Ivan and RC Express Racing’s successful retention of the Lightweight TT title, was as follows:

Following the earlier delays due to mist on the Mountain Course, the 2016 lightweight TT, got under way this evening at 6:30 PM.

Ivan Lintin for many the pre race favourite, slotted into race lead at Glen Helen on lap 1, leading James Hillier by just 0.338, Michael Rutter was only 0.114 further behind, Dan Cooper, Gary Johnson and Martin Jessopp holding the number one plate, completed the top six.

Super twin heavyweights on the roads Lintin and Hillier, by the Bungalow were breaking away from Rutter in third place now almost five seconds behind the pace setters, at Brandywell the KMR Kawasaki rider was a confirmed retirement.

At the end of a close fought opening lap James Hillier held a 2.1 second lead over Ivan Lintin, Gary Johnson on the factory CF Moto was third just 0.3 in front of Stefano Bonetti.

The battle between Hillier and Lintin, intensified on lap two. Positions one and two on the leader board remained the same at both Glen Helen and Ballaugh Bridge.

By Ramsey Ivan Lintin was charging on the Devitt RC Express Racing ER6 Kawasaki, now only 1.107 seconds off the race lead.

Over the mountain, the six time International road race winner moved into the lead, entering the pits at the end of lap two with a 1.443 second over James Hillier.

Martin Jessopp moved in front of Gary Johnson for third, Stefano Bonetti was also in front of the CF Moto mounted rider, Dan Cooper sixth, was impressing everyone with his sheer grit and determination.

The battle for third was hotting up, Martin Jessopp remaining third was coming under increasing pressure from Gary Johnson, determined to make up for a slow pit stop.

Holding a lead in excess of 11 seconds, Ivan Lintin at the end of the third lap, was on the cusp of becoming a two time TT winner.

James Hillier second, would need to produce a very special lap on the Quattro Plant Muc Off ER6 Kawasaki to reel in Ivan.

Meanwhile Martin Jessopp, Gary Johnson and Stefano Bonetti where closely matched in the battle for the final spot on the podium, around just six seconds covered the three of them.

Although his lead was reduced to almost just eight seconds at Ballaugh Bridge, Ivan Lintin got the hammer down again, by Ramsey Hairpin, pushing his lead up to almost eleven seconds.

Keeping calm in situations like this, is key to winning a TT Race, Lintin did this and more over the next timing points at the Bungalow and Cronk Ny Mona.

He crossed the line at the end of lap four, to clinch his second successive lightweight TT race victory. 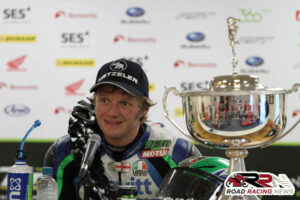 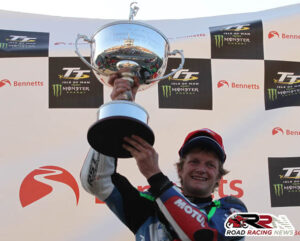 Whilst Martin Jessopp who edged out Gary Johnson by just two seconds for his maiden podium finish, said he was speechless at clinching his first top three placing at the most famous road race in the world.

Gary Johnson fourth, although missing out on a podium, still provided CF Moto with by far and away their best result and performance to date around the Mountain Course, encouraging for the future for the enthusiastic manufacturer from China.

Paton mounted Stefano Bonetti fifth, recorded a huge personal best TT Races result, his top five placing, represented one of the best performances by a competitor from Italy at the Isle of Man TT, in a long time.

Dan Cooper finished under the circumstances an excellent sixth, on his own teams ER6 Kawasaki, whilst Jamie Coward seventh, continued his impressive TT 2016 race week.

VRS Racing’s Colin Stephenson finished a fine eight just in front of DP Coldplaning/TC Racing’s Bjorn Gunnarsson. Finalising the top ten finishers was James Cowton, who was still suffering from the after effects of a high speed incident from Monday’s superstock race.

Ivan Lintin underlined this evening, why many consider him the leading exponent of the super twins class on the roads.

Now a two times TT winner, he’s joined a very, very exclusive club of riders to have been victorious twice at the Isle of Man TT.

International Roads Stints On The Horizon For Team RCR