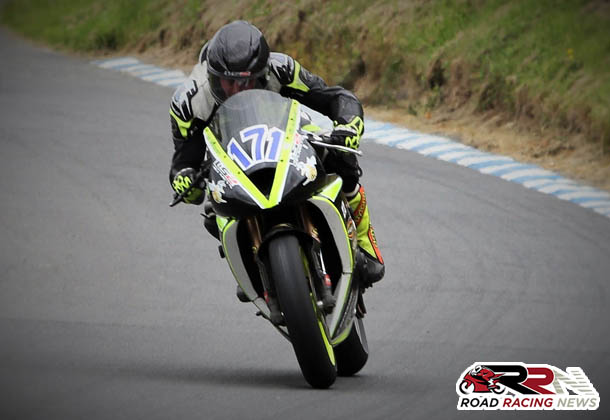 2016 Senior Manx GP winner, his answers to the Scarborough themed set of questions, are as follows:

“Initially a bit of a nightmare! The van blew its turbo on the journey up and we had to get it recovered back home.

My dad refused to give up, loaded everything into his work van and made it just in time for Saturday morning, to get my first taste of the Oliver’s Mount circuit on a borrowed SV650 Suzuki. Instantly fell in love with the place and couldn’t wait to come back.”

“For me it’s the camaraderie of all the riders, fans and marshals. We’re all one big family. People who tend to be into real road racing are proper bike fans; they’re not just interested in the big names and whoever is at the top of the time sheets.

They’re there because they love the racing and the atmosphere that true road racing brings. Every one who rides on the road is respected for what we do.

Must compliment the marshals for the job they do, and of course the fans, for taking the time to come and watch and cheer us on. I can’t wait to get back there this year to see everyone, and get back out on this iconic circuit.”

“It’s got to Jefferies Jump hasn’t it! I also really like the run down into Farm Bends too.

As you tip into the right hander trailing the front brake, it drops down hill and the rear goes light. Got some cracking photos heading down there with air underneath the rear wheel, committed on the front.

I seem to make up a lot of time through there carrying plenty of corner speed. Although I’ve also ended up in the bushes there a couple of times, trying to make too much time up!”

“It’s got to be beating a few of the top names, a few years back in only my second year there. I think it was the Gold Cup and it was a shortened wet race;

I was on my Triumph 675 in the Main race against 1000cc Superbikes. Obviously my power was a little more usable in the conditions, and I finished 2nd with the likes of John McGuinness, Michael Dunlop, Guy Martin, Bruce Anstey and some other top names behind me.

That’s a time sheet I’ll treasure! I also enjoyed another great moment at the 2015 Spring Cup, finishing 3rd overall from the Spring Cup A final races.

Although I had never opened a bottle of champagne in my life until then, and needed an on the job lesson from Guy Martin on the podium; I just kept shaking it like mad expecting it to pop. I looked a right muppet!!”

“It’s got to be Barry Sheene!” 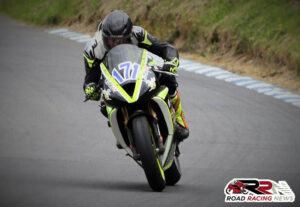 “My Burrows Engineering by RK Racing Suzuki GSXR 1000, and R6 Yamaha!! I’ll see if I can talk John Burrows and the boys into coming over and racing at the Gold Cup.

Unfortunately the first Scarborough event clashes with Armoy though, which I’ve already committed to. Fingers crossed they can sort the dates out between the two events in future.

“I respect anyone and everyone who puts themselves on a road racing grid. I had some great battles though with James Cowton at Oliver’s Mount, over the years. Always hard racing but always fair; proper class act!”