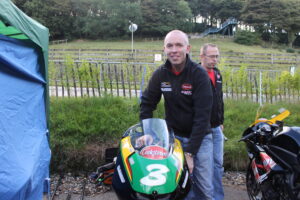 Michael Sweeney and the Burrows Engineering racing team run by John Burrows are teaming up for the 2014 road racing season. Michael is competing on a RS250 Honda for the team this season, 2013 in the 250 class saw Michael achieve many a notable result including victory at the Mid Antrim 150 road races.

Michael finished overall second in the Irish road race 250 championship in 2013. The combination of Michael and John Burrows, Burrows Engineering team for the 250 races this season is a top one and both rider and team will be confident of having a fantastic season of road racing this year.