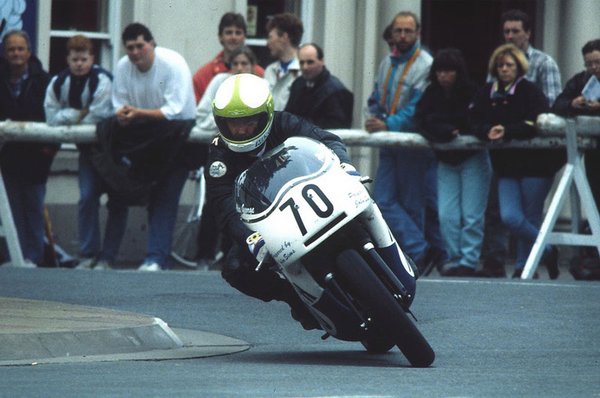 One of Scotland’s all time International roads greats, the legend that is Alex George who has triumphed on no less than three occasions at the TT Races, is the 150th racer to take part in Road Racing News rising in popularity Manx GP Top 6 series.

1979 Classic TT winner, Lightweight class winner on his Manx GP debut, his answers to the Mountain Course themed set of questions are as follows:

“I just soaked it all up, tried to get around the course with anyone from the grass paddock who was doing a lap!! Learn, learn, learn.

Nothing I repeat Nothing can give you so much pleasure than a well ridden lap around the Mountain Course. I will also state that the Manx Grand Prix started me on a lifelong quest to race and win.

I remember the first ever lap, still dark, rolling up to the starter, his sure hand on my shoulder, the green light and the tap!!!.”

“The 1st time I went to race we had a junk TD1a (Yamaha), with the clutch on the crankshaft!!. That was not a happy bike. Taught me lots.

The next bike we built ourselves, with a Jim Lee frame, a motor from Peter Padgett, the original TD1a rear wheel, a Robinson 4ls front brake, and M + P front forks. Was not the fastest but it flew around the many MGP bends and it could stop!!!.”

“Most treasured MGP moment was winning the lightweight 250 race on my homemade bike, with new lap and race records!!!. We had quite the party both in the paddock and downtown afterwards, everyone was happy for me, we had a blast !!!.” 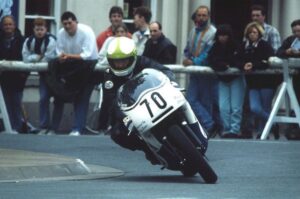 “All of the Scottish riders on 500’s. Jock Findlay, Geordie Buchan, Jack Gow, Davy Reid, Dennis Gallagher to name but a few, I learned loads from these guys, taught me how to ride around the Island, drink hard and chase gals!!!.”

You have to work really hard on any of these, to get the best from them, you have to listen, feel and respond to what the bike is telling you, use as little brake as possible.

As Bob Mac (McIntyre) shared with me “Aye Alex they look braw but they slow ye down too much.”