Karl Bennett is aiming for personal best finishes at TT 2015. This years Isle of Man TT has been a tremendous one for Karl tipped to become a sidecar TT podium finisher in the future. 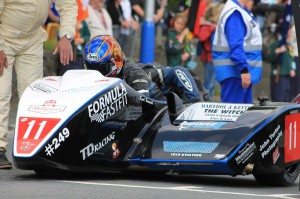 The 2014 Southern 100 saw the duo produce another highly accomplished performance as they clinched fourth position in sidecar solo championship.

There’s lots of rising talents in sidecar races currently at the Isle of Man TT and Karl Bennett is amongst them. TT 2015 is set to see Karl competing in a Honda powered outfit and the potential is there for his first podium finish on the mountain course.

Keith Amor Has Great Return To Competitive Action In 2014