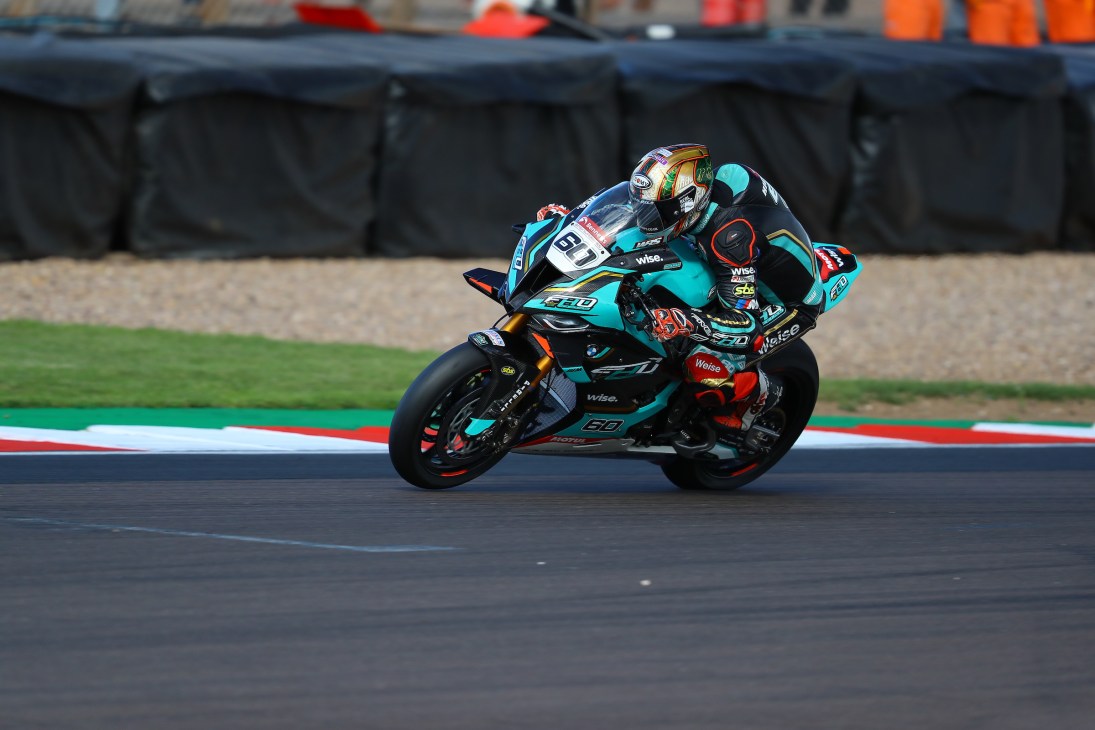 International road races were to the fore at the latest BSB round, with three roads ‘Aliens’ taking starring roles.

Entering Donington Park in a confident frame of mind, Peter Hickman backed up his pre-event positivity with blistering pace throughout practice, qualifying sessions.

Second fastest in qualifying, only behind Championship leader Jason O’Halloran, he would place ninth within the opening SBK encounter.

Ultimately finishing fourth, just 0.636 behind victor Tarran Mackenzie, he had the consolation of setting a new lap record for the Donington Park National circuit, lapping at 1 minute 06.081 seconds.

A 14th place finish would follow in the final Superbike contest, leaving Hickman currently sixth in the present Championship standings.

Speaking via FHO Racing’s official website, the world’s fastest road racer left Donington feeling that much more could have been achieved:

“Another disappointing weekend really as we had all the potential to be on the podium and fighting for wins. We had a really great start to free practice and qualifying and it all ended up coming to nothing in the end, but it was a really positive weekend for the FHO Racing BMW team.

The BMW is really strong, I feel strong and we have been fast and at the front, I made a wrong choice on the tyre for race three.

There is nobody to blame but myself as I thought after the sighting lap it would have stayed wet for longer. We take the positives to Cadwell Park, a good track for me in the past, so hopefully we can capitalise on that in a few days’ time.”

I think the term ‘true grit’ is fully applicable to Glenn Irwin, when reflecting on his latest British Championship tenure at Donington Park.

Come the conclusion of the 20 lap encounter, he recorded his and Honda Racing’s best result of 2021, finishing second.

The second big bike tussle around Donington wasn’t as prodigious to put it mildly, as early front runner Irwin was involved in an incident with FS-3 Racing Kawasaki’s Rory Skinner, curtailing his challenge.

Sustaining from the incident a dislocated shoulder, it looked to be touch and go as to whether he would be fit for the final Superbike race.

Passed fit to race, Irwin battling through the pain barrier would go onto secure another second place finish following a solid all round performance in mixed conditions.

“Thank you to Honda Racing UK I don’t really know what to say other than I have to thank the medics, physios, my team and all you amazing supporters.

Also to Eurosport UK for hopefully making everybody struggling realise they not alone.”

His third BSB rostrum finish of 2021, takes his points total for the season to 121, enough for him to hold one of the much coveted ‘Showdown’ spots.

Let’s be honest who would have predicted Dean Harrison would finish eighth in the final BSB race at Donington.

Even the Bradford racer’s biggest fans must have been pleasantly surprised when the second quickest racer in TT history, took eighth within Sunday’s second Superbike encounter, after an inspired switch to intermediate tyres.

Not looking out of place on the BSB grid, there’s no question that more prominent results are possible next weekend at Cadwell Park.

Multi times a race winner at the Lincolnshire based circuit, Harrison and the Silicone Engineering Racing Kawasaki squad will be aiming to impress the enthusiastic, knowledgeable crow descending upon one the UK’s top purpose built racing venues.

300 Turns of Gustav Havel – Results Round Up