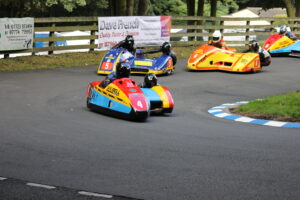 Ian Bell is returning to the Isle of Man TT in 2014. Ian who won the opening sidecar TT race in 2003 has in 2013 achieved many a top result including achieving a brilliant third place finish in the Southern 100 sidecar solo championship race. At Oliver’s Mount this year Ian was victorious in the sidecar races at the Ian Watson spring cup road races and at the cock of the north road races.

The Scarborough gold cup brought further success for Ian with race wins in all three sidecar races. For the Isle of Man TT next year Ian’s son Carl Bell is making his debut as passenger to Ian in the teams sidecar outfit. Its great news for the sidecar TT races that Ian Bell is backing at the Isle of Man TT.