Derek Mcgee is planning on making his Isle of Man TT debut in 2015. The highly talented road racer has in 2014 had a superb season of road racing which has included becoming for the first time Irish road race supersport champion.

This was achieved following frequent podium finishes including supersport race victory at Kells road races plus second place finish in a frantic supersport race at the Cookstown 100.

Super twins race in this years Ulster Grand Prix would prove to be a hugely memorable one for Derek. Second position was secured following a fantastic all round performance as he powered his way to his first international road race podium finish. 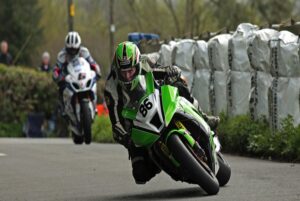 Rated highly by many Derek is aiming to compete on the mountain course in 2015. Competing on the most famous road racing circuit in the world is an ambition all pure road racers want to achieve and the rider tipped by many to be an international road race winner in the future is planning to make this happen next year.

Derek is currently on the lookout for sponsors to help him make his TT debut, there’s no doubt he has the potential to adapt quickly to a road race circuit which has seen in recent years newcomers get quicker, quicker and quicker.