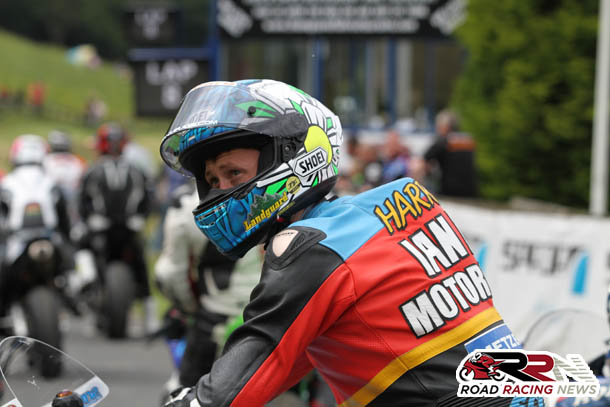 Dean Harrison continued from where he left off on day one of the 2016 Cock Of The North Road Races, continuing his dominant form on day two of action around Oliver’s Mount.

Piloting the Silicone Engineering Racing Kawasaki’s, Dean secured race two victories across three classes Junior A Supersport, Solo Open A and Senior to add to Cock of The North success.

Leading the challenge to Dean in the second Solo Open A and Senior races, was Devitt RC Express Racing’s Ivan Lintin, who wrapped up super twins race two victory, in continuing his 650 roads dominance.

Rising star Brad Vicars AJB Racing CBR 600 Honda, made it a Scarborough hat trick this weekend, with wins in the Junior B Supersport and Solo Open B races.

Alistair Haworth lead the 400 challenge in the lightweight race, Paul Gartland second 400 and third overall’s performance is all the more notable given it is Paul’s first roads competition since a high speed incident at the Vauxhall International North West 200.

Jamie Coward Mistral Racing ZXR 750 Kawasaki, made it a classic superbike double, carrying on his great form from the Pre TT Classic Races.

The third and final sidecar race of the meeting saw Wallis/Payne victorious in front of Crawford/Christie with Dean Lindley/Robert Bell finishing an excellent third.

Overall a top class two days of pure road racing action at the Cock Of The North Road Races, which saw Dean Harrison win seven races in a row, another great Oliver’s Mount achievement for the new leader of the 2016 Duke Road Race Rankings championship.